Once again, we’ve run across interesting info from a well-informed source…

The following graph, and commentary are highly relevant to the Australian property sector, even though many in the sector choose to ignore both the graph and its implications.

See for yourself, and draw your own conclusions! 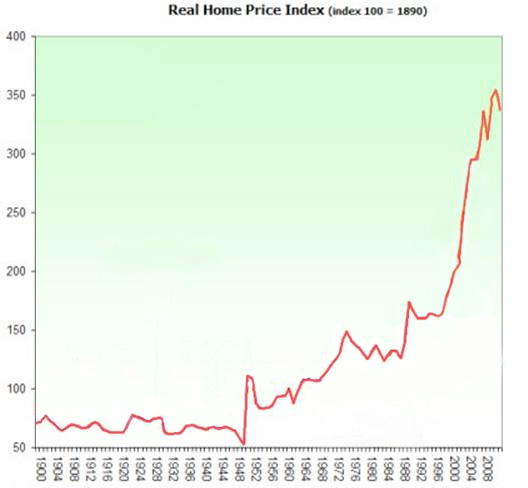 For more than 100 years the average Australian family was able to buy its first home on one wage. The median house price was around three times the median income allowing young home buyers easy entry into the housing market.

As can be seen from the above graph, the median house price is now, in real terms ie relative to income, more than nine times what it was between 1900 and 2000. At nine times median household income a family will fork out approximately $600,000 more on mortgage payments than they would have if house prices remained at three times the median income. That’s $600,000 they are not able to spend on other things – clothes, cars, furniture, appliances, travel, movies, restaurants, the theatre, children’s education, charities and many other discretionary purchase options.

The economic consequences of this change have been devastating. The capital structure of our economy has been distorted to the tune of hundreds of billions of dollars and for those on middle and low incomes the prospect of ever becoming homeowners has now all but vanished. Housing starts have plummeted and so have all the jobs associated with it – civil construction, house construction, transport, appliances, soft furnishings, you name it. Not to mention billions of dollars in lost GST revenue to the States. And while the slump in business conditions over the past years have been blamed on everything from the GFC to the high Australian dollar the real culprit has been the massive redirection of capital into high mortgages.

And looking to the Reserve Bank to fix the problem through monetary policy ie lowering interest rates, isn’t going to work.

The distortion in the housing market, this misallocation of resources resulting from the supply-demand imbalance is enormous by any measure and affects every other area of the economy. New home owners pay a much higher percentage of their income on house payments than they should. Similarly, renters are paying increased rental costs reflective of the higher capital and financing costs in turn paid by landlords.

The economic consequences of all that has happened over these past few years have been as profound as they have been damaging. The housing industry has been decimated as have industries supplying that sector.

The capital structure of our economy has been distorted and getting it back into alignment is going to take some time. But it is a realignment that is necessary. A terrible mistake was made and it needs to be corrected.