Soon after arriving in Adelaide from England, this couple gave me a brief to source and acquire a suitable classic old home for them.

After looking at several properties, they found online, a home they fell in love with. It was a classic sandstone-fronted, partially renovated villa more than a century old. Despite its shortcomings in terms of kitchen, bathroom and number of rooms, my clients just knew they could make it work for them.

Upon their instructions, I negotiated a discount off the asking price, and we contracted the purchase.

They organized an architect, and I introduced them to a builder they quickly felt comfortable with, and the extension and renovations began.

The house still looks virtually the same from the street, but it’s now almost twice as big as it used to be, and they’ve also added a swimming pool, yet there’s still garden space for the children to play. 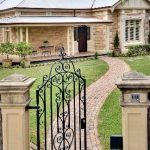